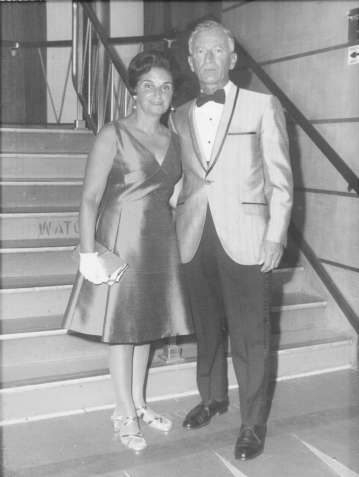 Kostas and Dora married and lived in the area of Clarksburg known as Despard, or Tinplate, because of the Tin Plate Mill, which in the early 1900s was the largest manufacturing enterprise in northcentral West Virginia. It was also known as Greektown because it was a community of many immigrant Greeks who had been recruited to work as tin workers. Kostas and Dora were instrumental in establishing St. Spyridon Greek Orthodox Church in Despard. 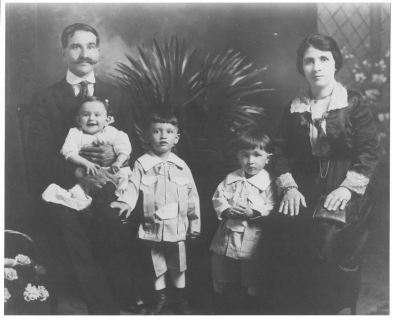 Kostas and Dora with their three oldest children—Nick, Steve, and Mike

Kostas was one of three partners in a bakery and grocery store. They also operated a butcher shop from the back of the store. When the partnership dissolved in the 1920s, Kostas began working in the tin mill. He worked long hours and was afraid the metal would run out and leave him without work.

Kostas then opened his own grocery store. It was a three-story building—two visible from the front and a bottom floor, accessible from the back, which consisted of a stable for their horse and

a butcher shop. He bought cattle, butchered his own meat, and sold bakery goods from a horse drawn cart.

Kostas and Dora had four boys and a girl—Steve, Mike, Nick, Stanley and Angie. The family lived above the store. In 1932, a fire broke out in the building. The youngest brother, Stanley, then five years old, remembered Steve carrying him out of the burning building. At the time, Dora was pregnant with their daughter, Angie.

The Great Depression was a difficult time for the family. Many customers purchased goods on account but were ultimately unable to pay, forcing Kostas to close the business. When the store closed, Steve, Mike, and Nick, then teenagers, went to work at New York Hat Cleaners. Steve graduated from Victory High School in 1936 and later worked as a clerk in a local drugstore.

In the late 1930s and early 1940s each of the three older brothers made their way to Baltimore, Maryland, in search of work. They all secured jobs in the shipyard. In 1944, the rest of the family also moved to Baltimore, all living in the Armistead Gardens community in the northeast part of the City. 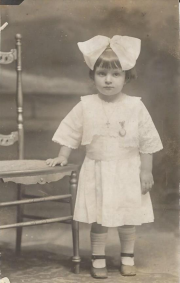 Marguerite (Margie) was born on December 9, 1917 at Bellevue Hospital in New York City to Panagiotis and Kaliope (Kaisoglou) Koutsobaris. Panagiotis and Kaliope had immigrated to the United States from the island of Kos, Greece. Panagiotis came alone, first, to secure work. He worked as a hat checker at a large hotel in the City. He sent to Greece for Kaliope and, when she arrived, they married. They lived in Manhattan and had three daughters—Margie, Sara, and Marye. They lived in a tenement house with one bedroom and a kitchen and shared a bathroom down the hall with two other families. They lived in a community of Greeks, so Margie didn’t speak English until she started school. Panagiotis’ cousin, Nick, suggested the family move to Lancaster, Pennsylvania for a job in the Armstrong linoleum factory. So, shortly after Margie started school, the family moved to Lancaster. However, soon after arriving in Lancaster, Panagiotis was told about a job at the steel plant in Clarksburg, so the family, including cousin Nick, moved to West Virginia in 1924. The family lived in Despard in an area with many other immigrants from Kos. Their home was across the railroad tracks from St. Spyridon Greek Orthodox Church. Margie joked that the first house their family lived in was on the “wrong” side of the tracks. They pumped their water and used an outhouse, as did others who lived nearby. She said the families who immigrated from the island of Chios, like the Steve’s family, lived on the elite side of town, with running water and toilets. 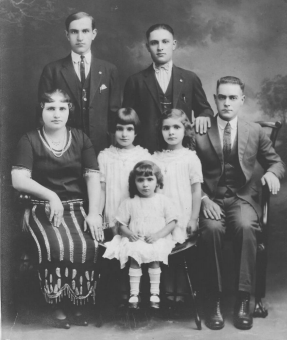 Nick was approached by an acquaintance who owned a restaurant—Sanitary Hot Dogs—that wanted to leave the business, so Nick took over the restaurant and Panagiotis worked there at night after his day work at the steel plant.

Side note: The recipe for the mouth-watering chili that was so well known on the chili hot dogs at the Dairy Queen on West Street was brought to Annapolis by Margie’s sister, Sara, from Sanitary Hot Dogs.

Margie’s parents did not believe that girls needed an education, so when she was fourteen, they removed her from school. Margie remembered a truant officer showing up at their door, saying she had to attend, which pleased Margie because she liked school and enjoyed playing basketball there. However, after she started the tenth grade, her mother’s sister, who lived in Brooklyn, New York asked if Margie could come to live with her and help in caring for her daughter, who was about eight years old. So, Margie was sent to New York to live with her Aunt Katrina, Uncle Frank, and their daughter, Bessie Prassos. 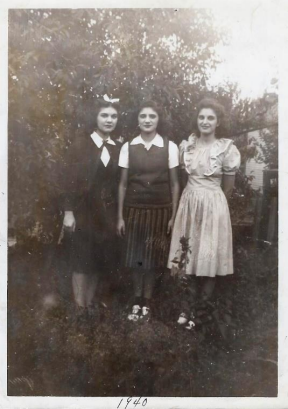 It was her Aunt Katrina who arranged Margie’s marriage to James Mastros. They were married in 1935, when Margie was 17, and lived in an apartment that her aunt set up for them on the upper floor of her house. They had a son, Seymour, in 1936, and moved to Clarksburg to be near her family in 1937 or 1938. Their daughter, Carrie, was born there in 1940.

In the early 1940s, the family moved to Baltimore for work. Margie waitressed during the day and, at night, ironed clothes to make money. Theirs was a troubled marriage that ended sometime in the early 1940s. Margie was awarded full custody of their two children.

In the early 1940s, both Steve and Margie were living in Baltimore and, at some point, even living in the same community. Margie knew Steve’s family from when they had all lived in Clarksburg, and Margie was close friends with his brother Mike’s wife, Lena.

Steve and Margie began seeing each other and dated for several years. Steve was inducted into the Army in 1945 and, after his basic training was completed, he was sent to Germany to serve as a guard during the trials of the International Military Tribunal Court in Nuremberg.

Steve and Margie corresponded while he was stationed in Germany. Upon his return, they married on October 10, 1946, and honeymooned in New York City. 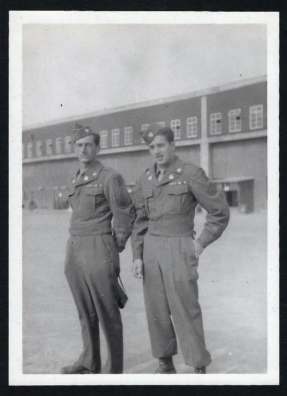 Steve (left) in Germany during the time of the Nuremberg trials

By 1947, Margie and Steve had moved to Annapolis, Maryland. They both worked in the S&S Restaurant on West Street, owned by Tom Siomporas, and together raised Margie’s children. Margie’s two sisters had both married Annapolitans in 1947, and were also living in Annapolis. Sara had married Nick Samaras and Marye had married Gus Leanos.

In 1949, Margie and Steve were living on Franklin Street in downtown Annapolis and had a baby girl. Their daughter was christened Theodora (Dottie) in Baltimore at the Annunciation Greek Orthodox Church, as the Saints Constantine and Helen Church on Constitution Avenue, in

Annapolis, was still about a month away from holding its first services. Her godparents were Mary and Cleo Apostol, who lived across the street from their family on Franklin Street. 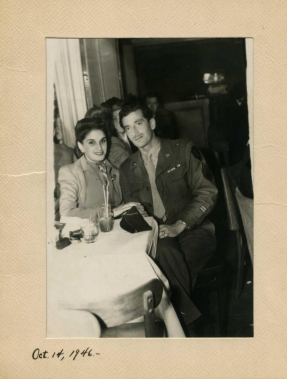 In 1950 or 1951, Margie and Steve opened the Dinner Bell Restaurant on West Street, near Route 2, just outside of the Annapolis city limits. They rented the building from Tom Siomporas and moved into an apartment above the restaurant. Steve’s father would often travel by bus from Baltimore on a Monday, help out in the restaurant all week, and return to his home in Baltimore on Friday. Margie and Steve’s daughter, Carrie, waitressed there when she was a teenager.

In 1953, Steve and Margie built a house on Willow Street, within walking distance of the restaurant, where they lived for about 29 years. 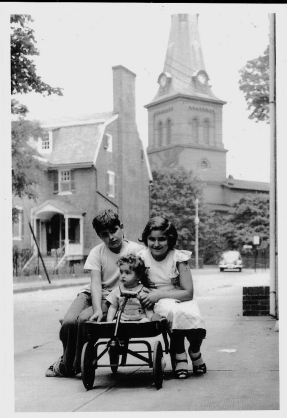 outside their home on Franklin Street in downtown Annapolis

In 1957, they left the restaurant business. Margie worked for a brief time at the Montgomery Ward catalog store, which was located in the first block of West Street. That same year she began work at the Maryland Office of the Comptroller, where she worked in the Income Tax Division. After leaving the restaurant business, Steve did carpentry work and, in 1959, also gained employment in the Maryland Income Tax Division. 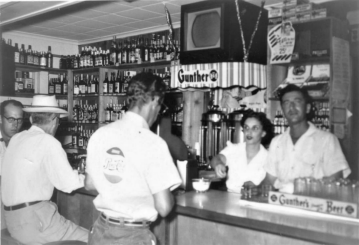 Margie and Steve enjoyed summer vacations in Ocean City, Maryland. In 1973, they took a six week trip to their ancestral islands of Kos and Chios, in Greece, visiting relatives with whom they had corresponded, but never before met. 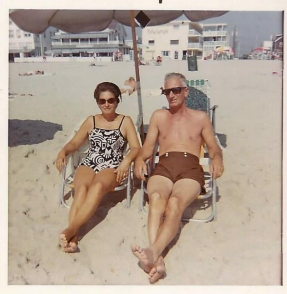 In 1976, at age 59, Steve suffered a stroke. He never fully recovered, and Margie retired from her job at the Maryland Income Tax Division to care for him. They moved out of their home on Willow Street, because caring for Steve and maintaining their house and yard was too much for Margie to handle on her own. They moved to the Severn House Condominium community in Eastport early in 1982. Around 1986, it was necessary for Steve to be moved to a nursing home. One in Eastport was chosen, as Margie did not drive and it was important that he be somewhere within walking distance. She walked there every day, helping to feed him his lunch and keeping him company during the afternoon. Steve passed away in 1990 at age 73. 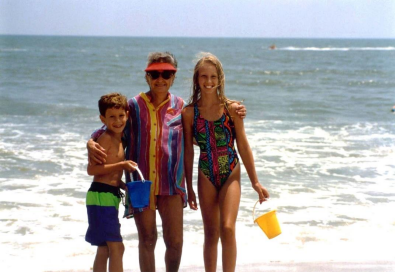 Margie with two of her grandchildren, Patrick and Erin, in Ocean City, MD, in 1991

Margie enjoyed spending time with her children and grandchildren and every year would spend a week or two around Thanksgiving with her daughter Carrie’s family, who had moved to southwestern Virginia, near Bedford. She also enjoyed spending time in Ocean City every summer. It was probably her favorite place to be. She would sit on the beach under an umbrella the whole day. If it got chilly, she would just wrap up in a towel and sit there, not wanting to give up a single day. It was definitely her happy place. The last time she was there was in 1999, about a week before she went into the hospital suffering from heart problems. She wasn’t feeling well when she was at the ocean, but never said anything. She probably didn’t want to be robbed of any of her time there. 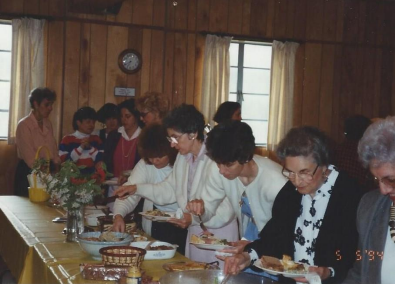 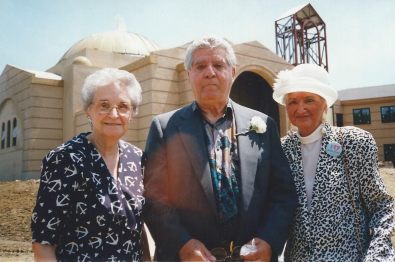 Margie with her brother-in-law, Gus Leanos, and her sister, Marye, in 1996, at the recently constructed Ss. Constantine and Helen Greek Orthodox Church 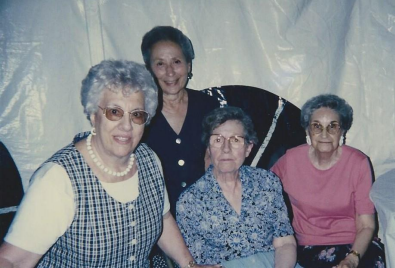 On August 4, 1999, Margie underwent quadruple bypass surgery. Given her age, it was a risky procedure, but the family’s spirits were high immediately after surgery when they were told that she had come through it well. Unfortunately, within an hour, while she was in the recovery room, things took a bad turn and she passed away. She was 81.

Margie was survived by her three children (Seymour, Carrie, and Dottie), six grandchildren (Rick and Steve Anderson, Allen and Keith Mastros, and Erin and Patrick Myers) and three great-grandchildren (Ross and Derrick Anderson and Joseph Mastros). The month following her death, on the day of her 40-day memorial service, her son, Seymour, passed away.