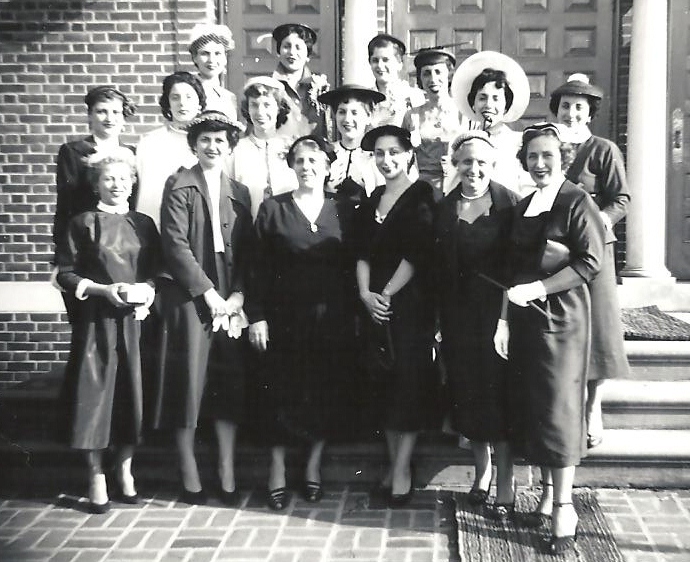 Constantine “Gust” John Alvanos, was born in Yelea, ( known today as Pelopi) on the island of Lesvos, in 1877, the third of six  children born to John and Vaselina Alvanos. 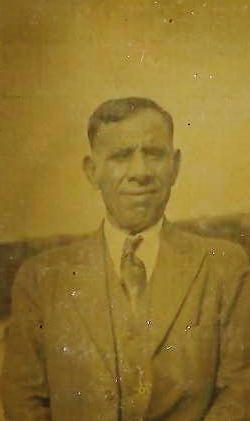 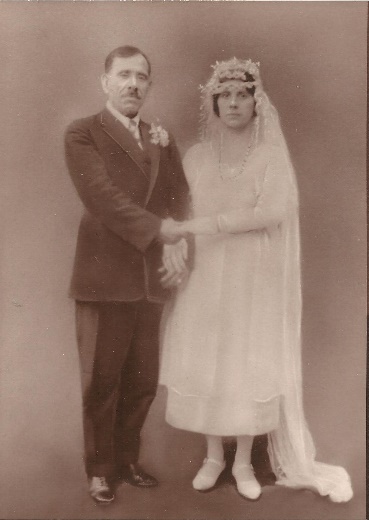 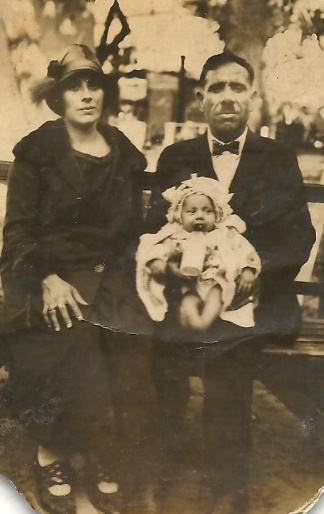 In 1922 Constantine “Gust” John Alvanos left the island of Lesvos and came to America to get established in a business. He settled in Waynesboro, Pennsylvania.  After obtaining his U.S.citizenship, he returned to Lesvos to marry his bride, Theano Mamoulides in 1925. He was 48 and she was 26.  Theano was the fourth of nine children born to Demetrious and Efthimia Mamoulides.

In June 1926 Constantine and Theano had they’re first child, a daughter, Vasilea, and in November 1926 Constantine, Theano, and Vasilea were on a ship to the United States by way of Ellis Island.

Constantine and family arrived in Waynesboro, Pennsylvania, where Constantine owned and operated a wholesale business. 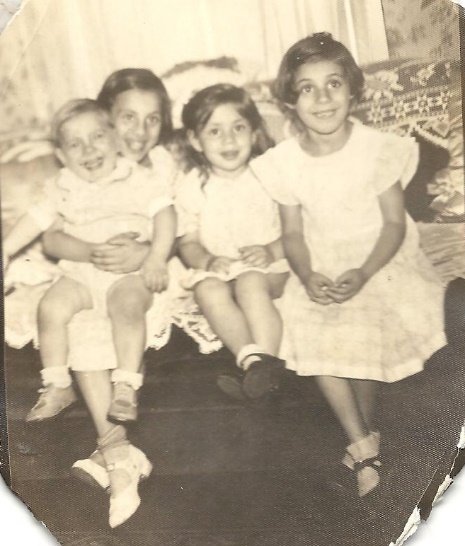 In 1934 Constantine and Theano packed up the four children and drove to Annapolis, Maryland, where Constantine purchased his home and a business downtown Annapolis. The business was a dance hall, lounge which he partnered with John Highland. The building was located 3-4 doors down from the corner of Conduit at 155 Main Street 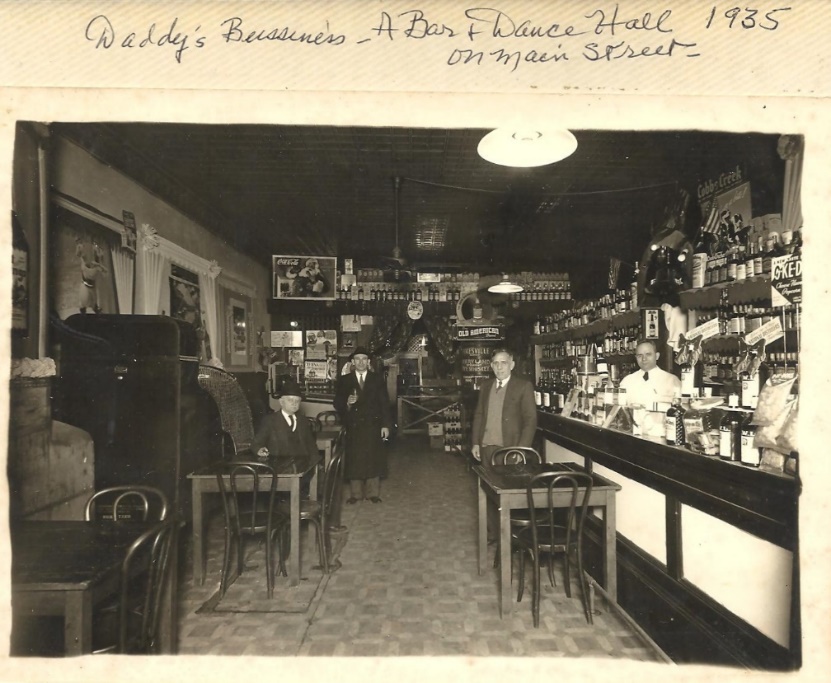 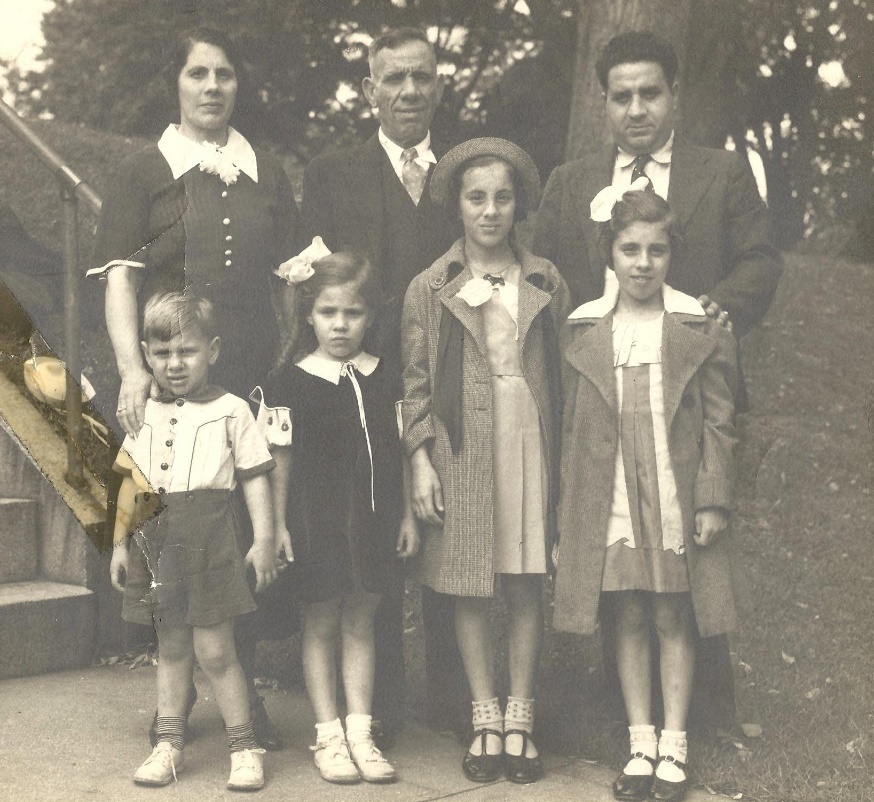 It was 1938 when Theano and her friends in the Annapolis

Greek community came together under their direction of Father Iochiam Papachristo and started the Agia Anna Ladies Philoptochos.

The first board consisted of these pioneers that helped strengthen the bonds between the Greek families as well and a connection with the non-Greek Annapolis community. This became and continues today to be the foundation of our community.

In December of 1939 the world changed for the Alvanos family with the passing of Constantine.  Theano Alvanos moved to West Street; living close to many Greek families. In 1944 she bought a home on Conduit Street and opened up an Alteration Shop at the other end of Conduit St. (near Main Street).

Theano raised her four children downtown Annapolis where they grew to be active members in their community. She assimilated to the American way of life through her children, yet always staying strong in her faith.

As the families grew through these early years the need of a church in Annapolis became evident. In 1949, these families collectively helped build the foundation of what was to be the Ss. Constantine and Helen Greek Orthodox Church on Constitution Avenue. Prior to that, the families had to find transportation to the Annunciation Cathedral in Baltimore. Meanwhile, Father Iochim Papachristo would come from Baltimore to Annapolis to help guide the Agia Anna Philoptochos, and provide holy sacraments to families in their home. 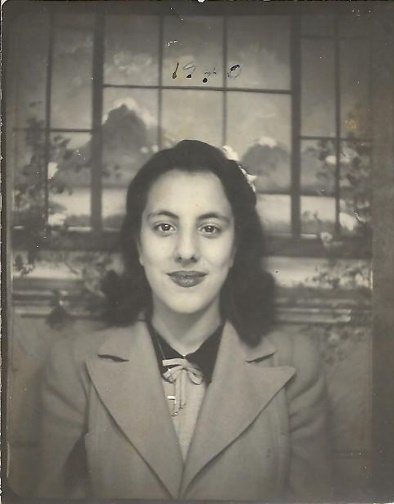 Vasilea, being the eldest took the responsibility as the other parent at the age of 14, when her father Constantine passed away; Helping her mother raise her three siblings and learning the skills of a homemaker at a very young age. Her childhood friendships were with Georgia Mandris (Nichols)and Helen Pappas (Palaigos ) and they continued their friendships through the years as they raised their children, who also developed friendships with one another.

January 1st, 1943, Vasilea was in Washington DC with a family friend for a name day gathering when she met her future husband who was home on leave with the US Army. His name was Sotirios Michael Panagiotareas. As a young man in Greece he served his commitment in the Greek Army. When he came to the US, he served in the US Army during World War II, receiving a Bronze Star and a Purple Heart, along with other medals/ribbons. 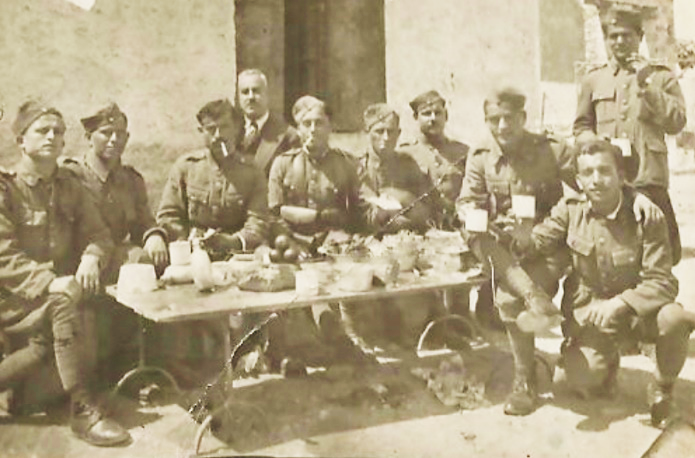 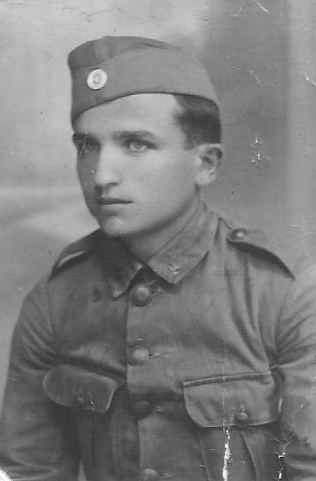 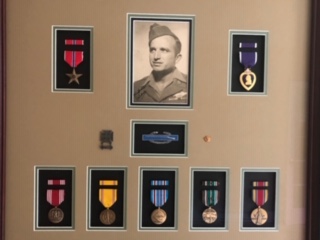 When Vasilea ( Viola amongst school friends) graduated from Annapolis Senior High, in 1944, she started working at the U.S. Naval Experimental Station and continued her correspondence and letters with Sotirios during this wartime, and a courtship developed. Sotirios would visit when he was in Washington DC at his sister’s house, Antigone Recachinas. His father Michael Sotirios, was living there as well, and his mother Stamata and sister Olga were in the village of Oytilo in Mani.

With a chaperoned courtship, and blessings of both families, Vasilea and Sotirios were engaged to be married April 28th 1946 at St. Anne’s church in Annapolis.

Fr. Papachristo, who officiated the ceremony also had to return to Baltimore to also marry Savvas and Margie Pantelides; (who became close family friends /koumbari through the years). For this to take place Vasilea moved the time up to 3pm, and their reception was at the National Guard Armory. 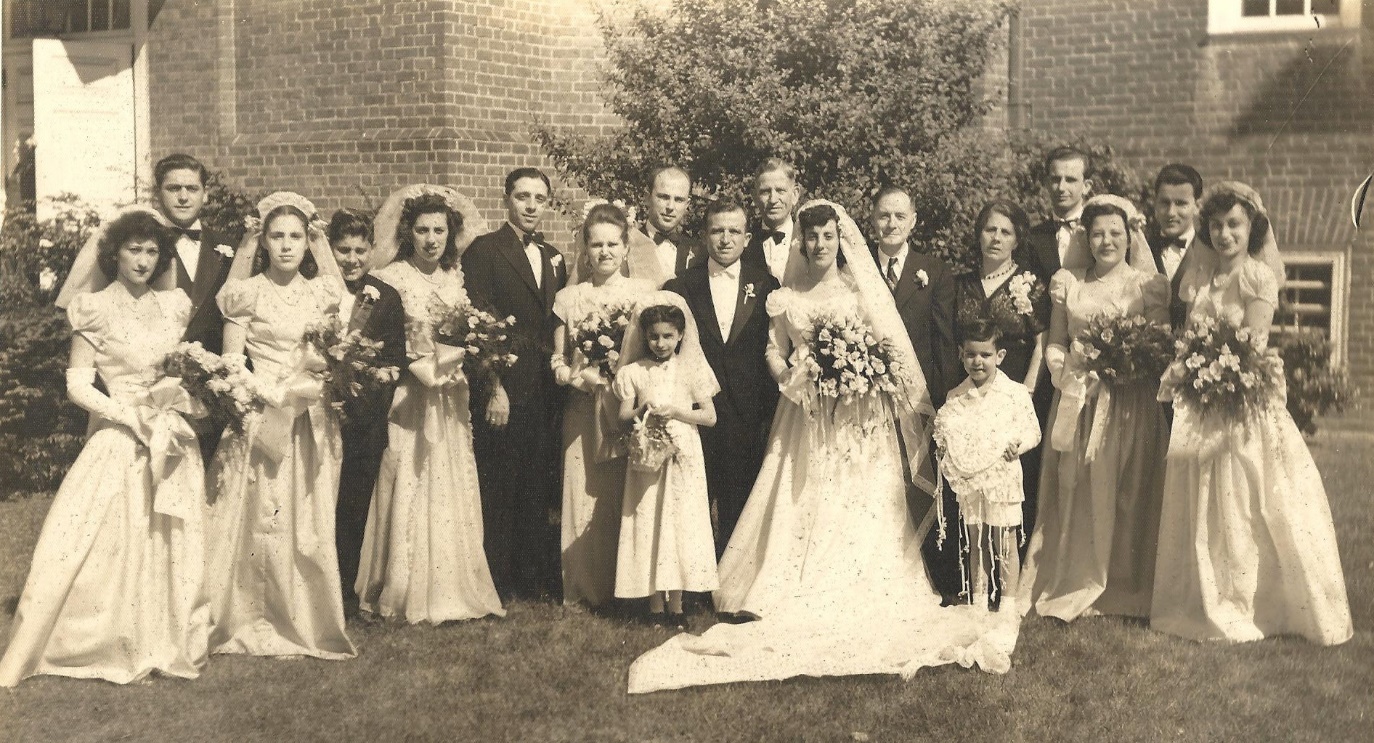 Vasilea (Viola) and Sotirios settled in Annapolis and lived at 73 West Street with many other newlyweds at the time, like Bessie and Charlie Samaras and Savvas and Margie Pantelides. As many during this time, their families began to grow, so many started purchasing their homes in the area.

Meanwhile in 1946, Theano Alvanos sold her share of the business on 155 Main Street, which was once called “Charlie’s Tavern”,  to Sotirios,  relinquishing ownership. Then a partnership with Sotirios and John Highland was established  and the business “John’s Tavern”, which was then located further down at 131 Main Street was born. When the lease expired the partnership dissolved, and Sotirios managed LaRosa’s Bar on Main Street before purchasing the Tastee Freeze in Edgewater, Maryland in 1962. (Sotirios Retired in 1982 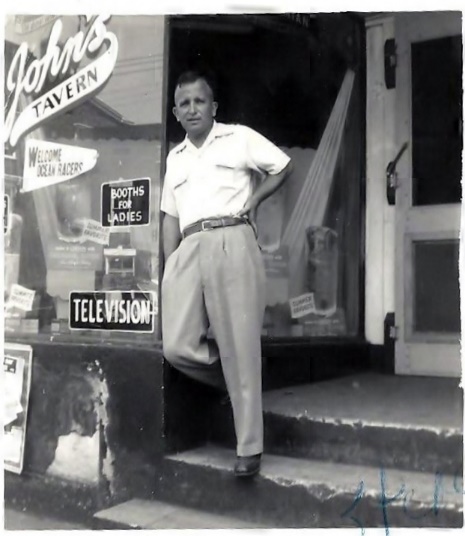 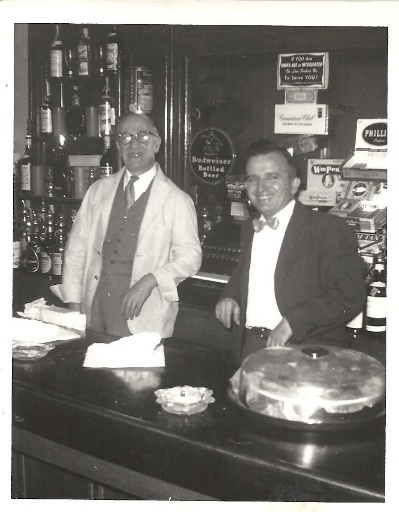 Their first child Stamatiki Sotirios was born June of 1947. In April 1948, Sotirios legally changed their family name from Panagiotareas to Panos. Two months later, June of 1948, their son Michael Sotirios was born. In 1953 they had another child, a daughter, Theano Sotirios. Tradition is that the child has the father’s middle name to distinguish who the child belongs to. In the village there could be several children with the same name because of their grandparents, yet a middle name of their father tells one who’s family it is.  In July of 1954, Stamatiki was legally changed to Tina.

In 1948, Vasilea and Sotirios moved to 177 Green Street, across the street from the Annapolis Elementary School, where most of the children attended from the Greek community. In the 50s and 60s living downtown Annapolis was ideal. Many friends and families lived within walking distance from one another.  The Drakopoulos‘ lived next door, and next to them was Garifalia Christo, on Market Street were the Bounelis’, and Eleftheria Lewnes,  and Samaras’w/yiayia Daphne on Union St. , the Palaigos’s, Mandris’, and  Yiayia Theano lived only two blocks away on Conduit Street. The Nichols’ and Pappas’ lived on Duke of Gloucester Street.  Every block around town had several Greek families living. Annapolis was definitely a village for many. Many of the parents were addressed as Theo and Thea (aunt and uncle) because of the close bond amongst the families, hence the statement “it takes a village to raise a child”.

There was no doubt that many of these baby boomers were also the first generation here in the United States, so Church, Family and a strong work ethic were the beliefs of many families at time.

It was 1959/60 when Viola decided to go to work for the income tax division for the State of Maryland. This was when Theano started first grade. The situation was ideal because Sotirios was home during the day and worked in the evenings. It wasn’t unusual that you could go across the street for lunch and have a big meal that Dad would cook.  On another day we would go to the Nichol’s family restaurant, The Little Campus on Maryland Ave, or the Bounelis’ family restaurant, The Capitol, for lunch.

And when there were events at school all the Moms and Yiayias along with Sotirios would be there to cheer the kids on (in Greek of course!).   After school, several days a week, was Greek school at the church.

Many of the children spoke Greek at home because of their families, yet dreaded going to Greek school, but knowing they were with their friends made it fun.

As the children grew up in the area they attended many different activities socially, birthday parties, name day open houses, where singing and dancing was the norm.

The church was the hub of the Greek community. Like many, Sotirios and Viola were active participants in the church. Sotirios was on the Parish council and a member of AHEPA. Viola was a Sunday school teacher and an active member of the Agia Anna Philoptochos, like her mother before, Theano, as both became president of the Annapolis chapter.  They also felt it was important to be involved in the church community and with that, their children too were involved.  They set an example. All three children attended Greek school and Sunday school, attending church recitals, and were GOYA (Greek Orthodox Youth of America) members, as well as officers. Mike was an altar boy for many years and the girls both sang in the choir. 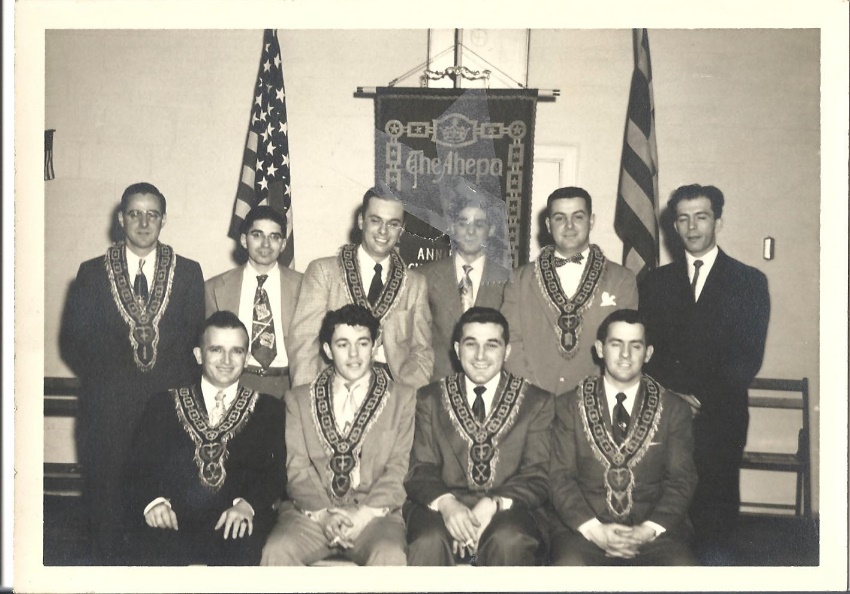 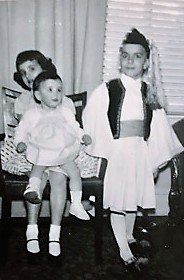 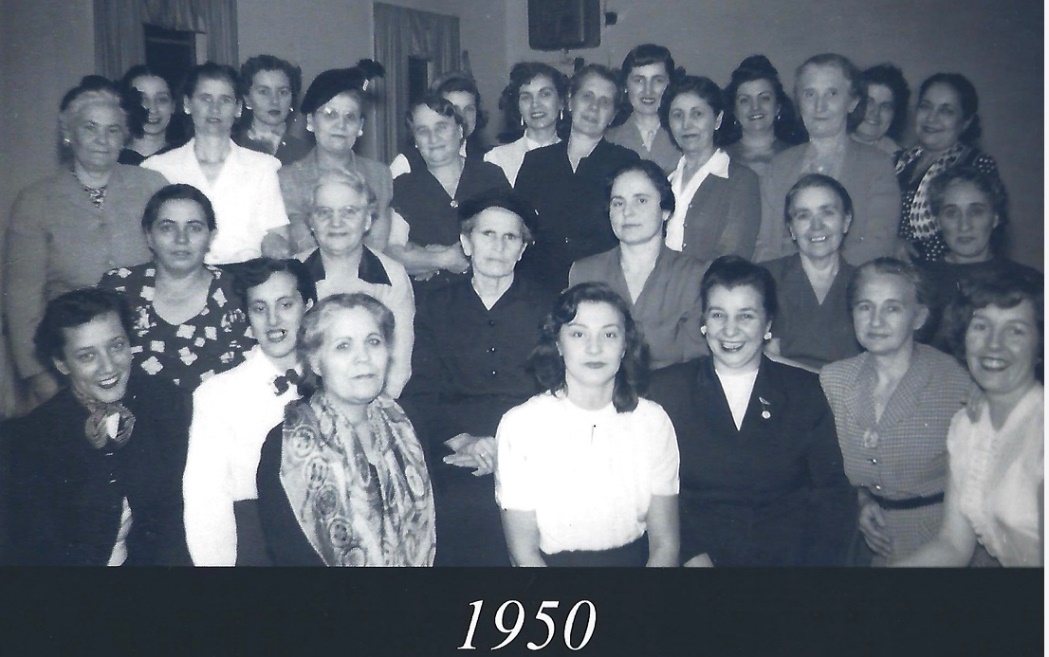 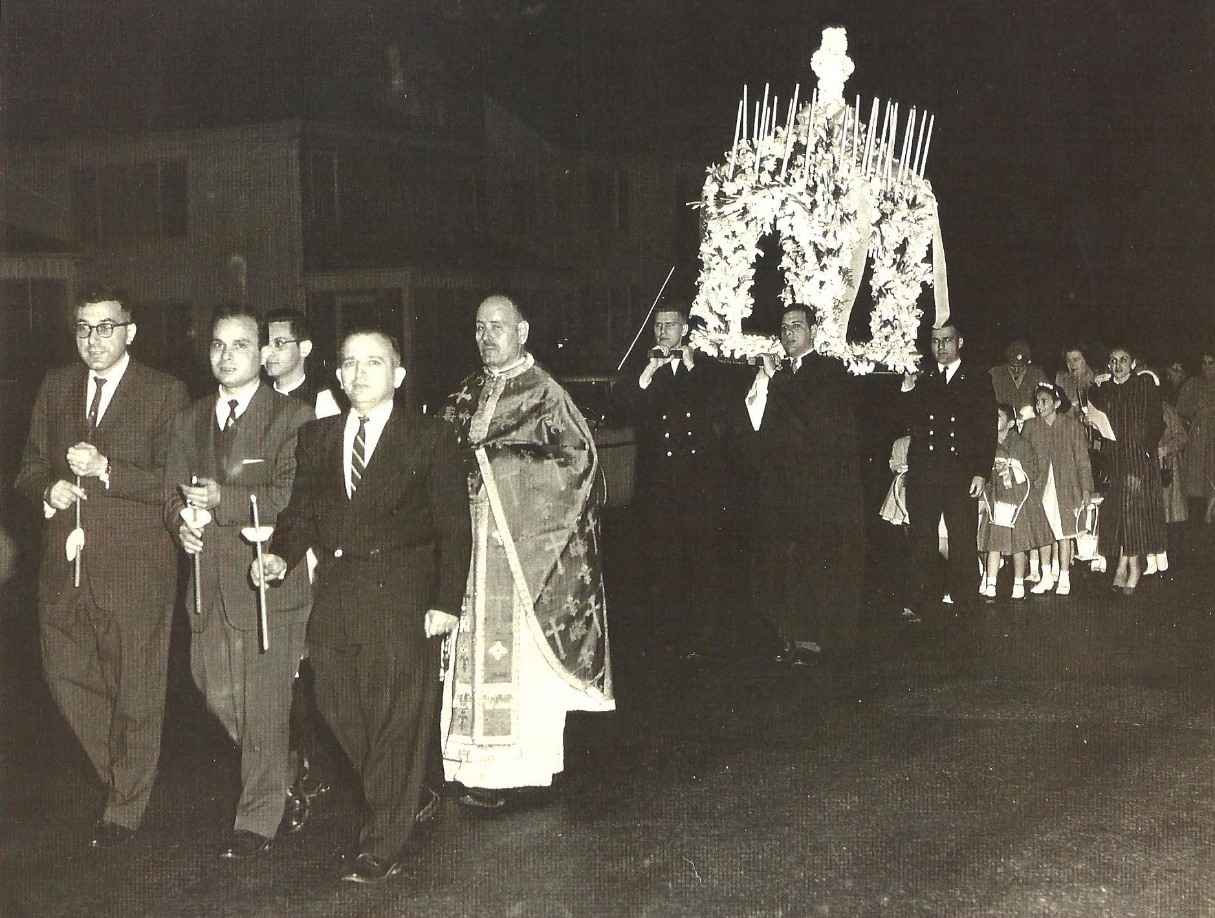 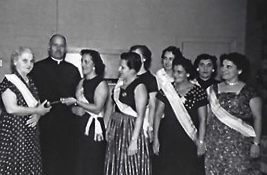 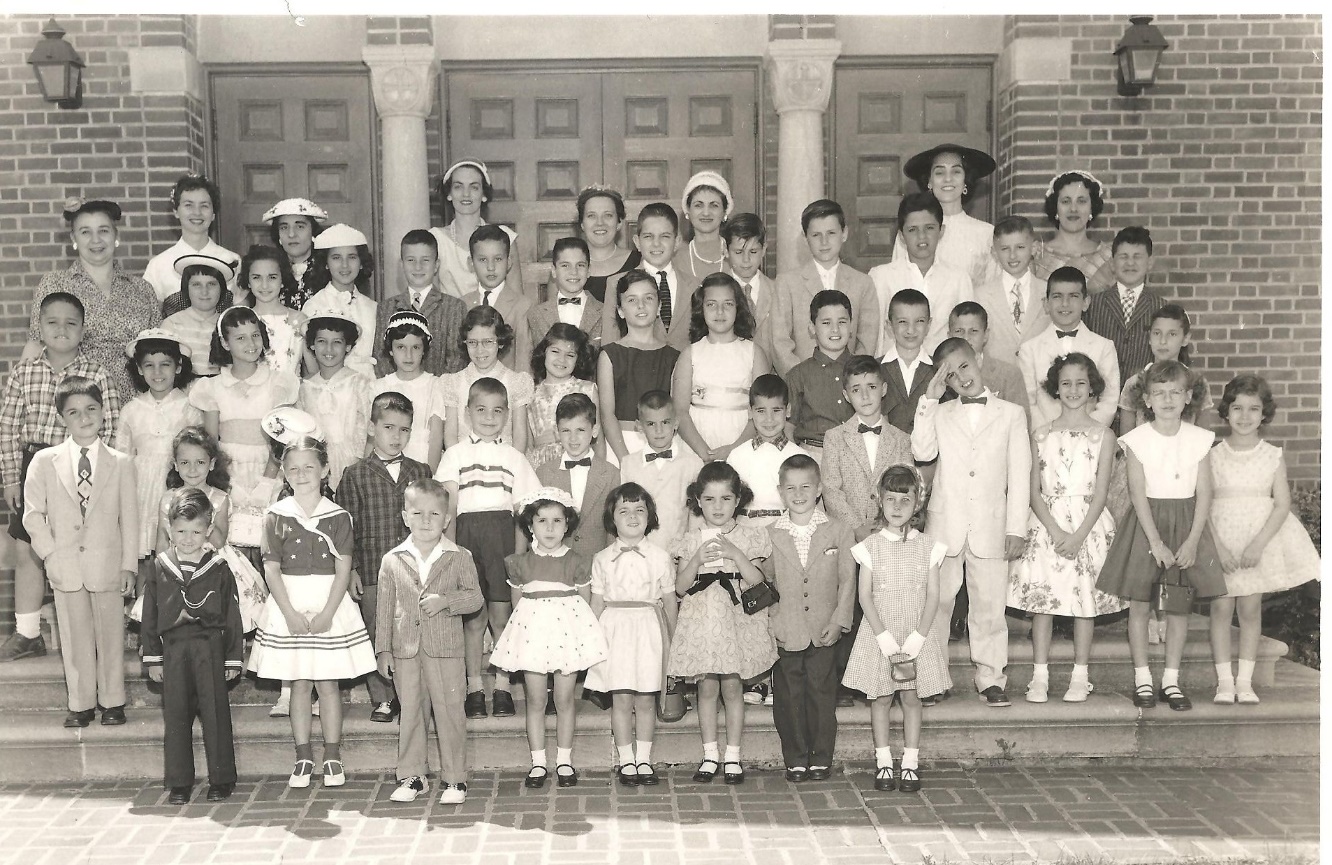 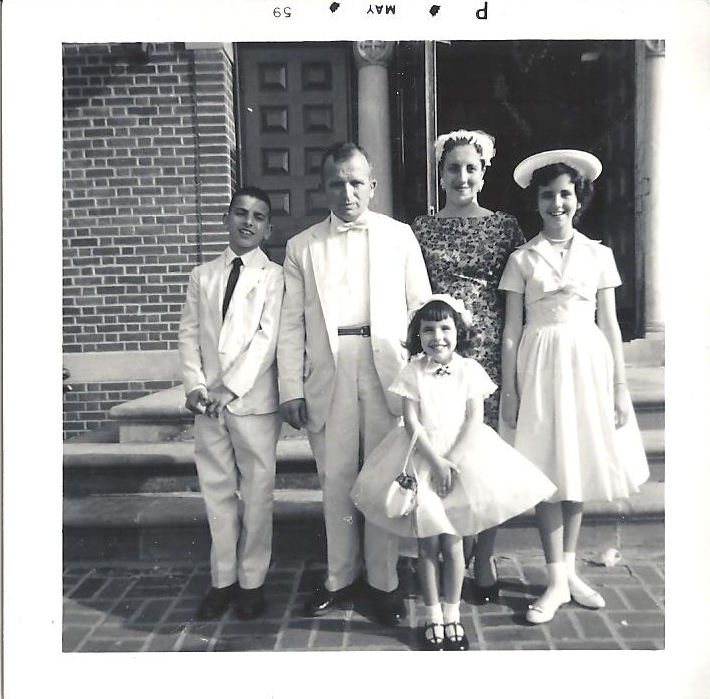 During Sotirios’ time at the Tastee Freeze (1962 -1982) like many of their friends, they would go to the track, play cards and play the lottery.  You can go to the track and bump into 10 Greek friends from Annapolis.

In 1975; he decided to buy a lottery ticket from his Koumbaro, Pete Palaigos, at Pete’s pool hall on Main Street.  Well he hit it big – $50,000.00! Like most Greeks do, a party was held with plenty of food and drinks to celebrate with friends and family. It made the front page of the local paper.

Of course the next morning was no different, Sotirios got up and went back to work and dished out ice cream cones and hamburgers and chili hotdogs, as he always had. He sent his four nieces and nephews to Saint Basil‘s Academy camp, planned his road trip with friends to California, and returned to a new dishwasher for Vasilea’s remodeled kitchen, in their modest rancher in Admiral Heights ( moved there in 1964).  Life was good!

His love for politics allowed him to be on the Annapolis City Board of Elections later, in the late 60’s early 70’s.  It was instilled in us how important it was to vote and it was a privilege and our right to make our vote count. So needless to say a phone call on any election day every year was made to check in to see if everyone voted.

As the children grew and went off on their own, there was no doubt that what they learned growing up in Annapolis stayed with them. 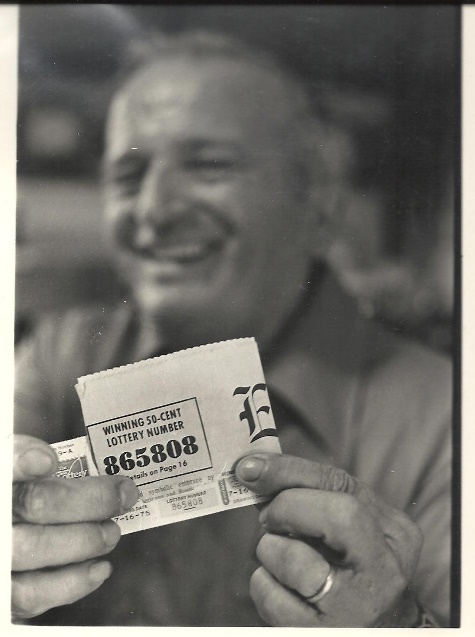 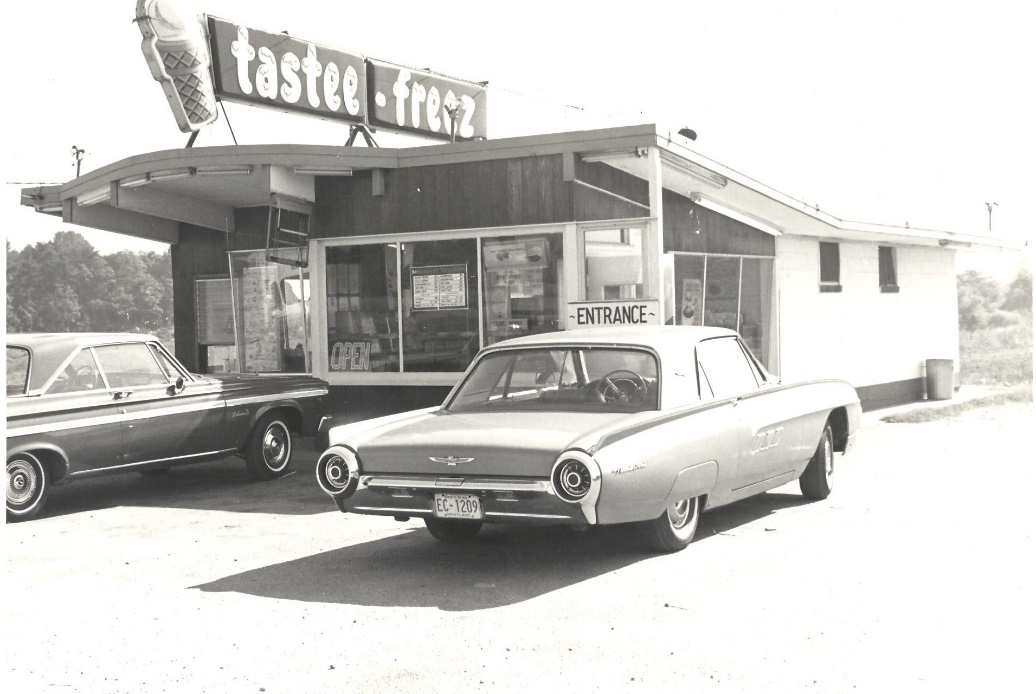 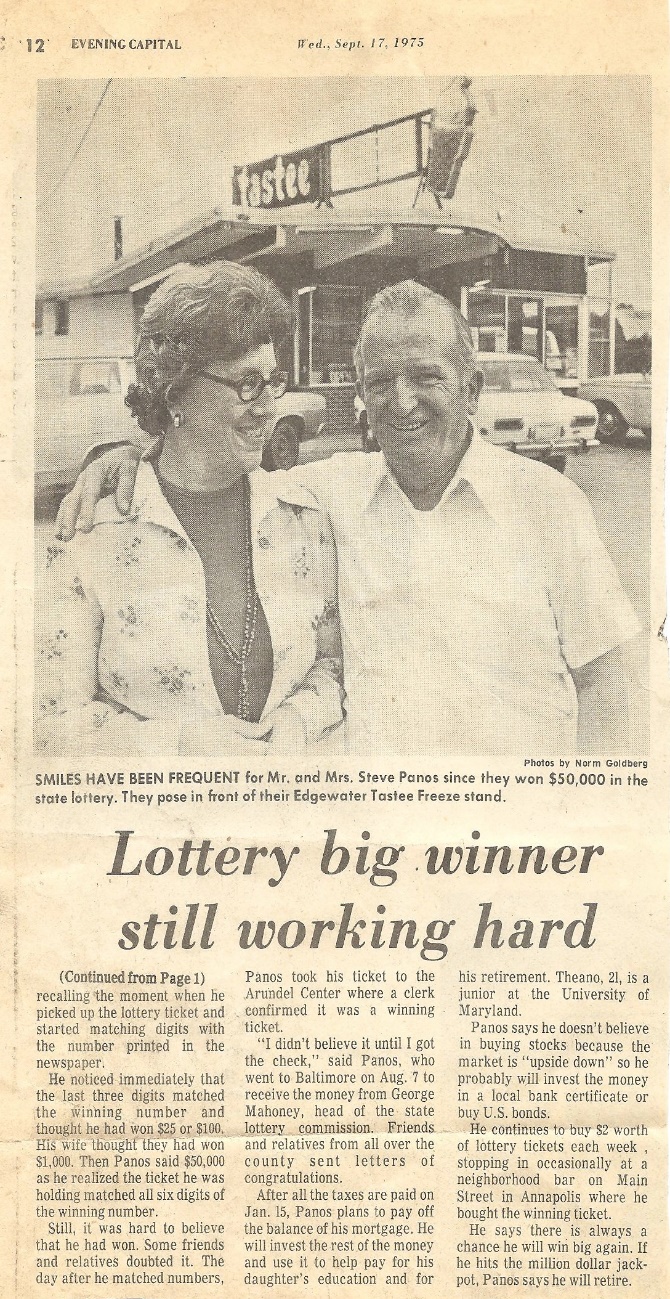 The eldest, Tina, move to Massachusetts and married Art Veves and they raised their two sons in the Greek Orthodox Church where they both were in the altar and Tina continued singing in the choir, taught Sunday School, and also became a member of the Daughters of Penelope In Lowell, Mass.

Mike returned to Annapolis from Phoenix Arizona, with his bride Evelyn Ladas, after serving 4 years in the U.S. Air Force. Both were active members in the Church. Mike was on the parish council for 20 years and a past president for five terms. For his service to the Church and the community he was awarded the Medal of Saint Paul, by Metropolitan Silas, the highest honor of the Greek Orthodox Archdiocese of America. given to a Layman. Evelyn was both a member of Agia Anna Philoptochos and Daughters of Penelope.   Their daughter and son attended Sunday School, Dance troupe, and were both members of GOYA, and their son was in the altar.

Theano and her husband Bob Platt settled in Annapolis and became active with the church. Theano continued singing in the choir, became a Greek dance instructor, GOYA advisor, a member of the Ladies Agia Anna Philoptochos, board member and Historian as her mother Vasilea, before her.  The children were also active with Sunday school, the dance troupe, GOYA, as well as the altar. 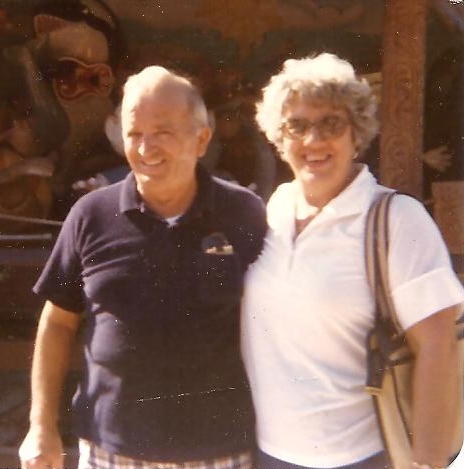 Sotirios passed away 1987, and Vasilea passed 25 years later in 2012. They were pioneers of their generation, and their contributions to the community will never be forgotten, as their legacy continues in generations to come. 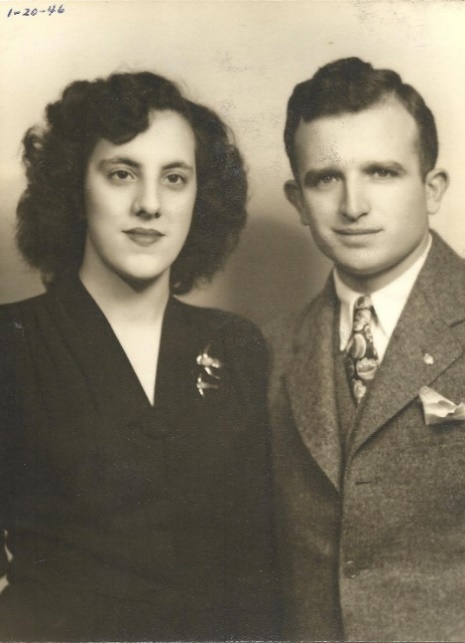