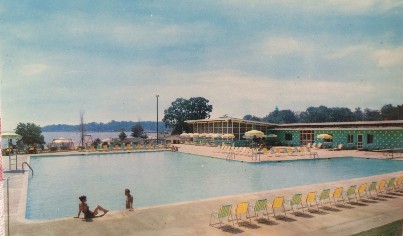 During the early 20th century, Annapolis area beach resorts flourished. Summer communities and recreational areas had occupied much of Anne Arundel County’s Chesapeake Bay shoreline, drawing Annapolis area Greek-American families away from city heat and humidity. Greek-American children, already part of the tight-knit Annapolis Greek-American community via many cousins and classmates from Sunday School and Greek School, continued bonding with each other by the near daily family outings at the beach clubs.

By the 1950s the advent of home air conditioning reduced demand for the cooler beaches, and, after the construction of the Bay Bridge in 1952 and the establishment of Ocean City as a major vacation destination, many local public beaches struggled to stay afloat. By the 1960s, political changes accelerated the demise of Annapolis area beach resorts: banning of slot machines and desegregation due to Civil Rights Act of 1964 and public pressure. By today, all Annapolis area privately owned beach resorts have been converted to other waterfront facilities, leaving Sandy Point State Park as the sole remaining Annapolis area public beach. 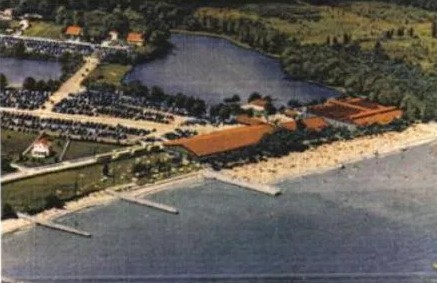 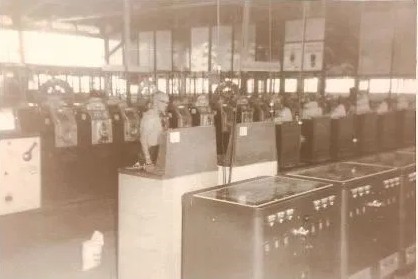 Beverly Beach was a major resort serving the Annapolis area from 1925 – 1968. Located at the eastern terminus of Central Avenue extended (Maryland Route 214), Beverley Beach offered easy access from the DC area as well. On weekends during its peak, Beverley Beach drew hundreds of cars and several busloads of people from the Washington and Baltimore areas.

Beverly Beach was comprised of over 300′ of direct Chesapeake sandy beachfront, a net for stinging nettle protection, and a large service and entertainment area which included lockers and showers, food pavilion, gambling (slot) pavilion, swing sets, and arcades.

Notwithstanding its continued popularity and crowds even a decade after the Bay Bridge opening, two governmental actions in the mid-1960s led to the closure of Beverly Beach: the Maryland Assembly’s elimination of slot machines and court ordered desegregation (to which the resort’s owner shuttered its entrance rather than comply).

Many Annapolis area Greek-Americans took advantage of Beverley Beach’s family-oriented offerings (plus slot machines for adults). Often, our mothers would plan family meet-ups with adjoining beach umbrellas, beach chairs, towels etc for the mothers to socialize while the kids played in the water under the watchful eyes of the heavily engaged lifeguards located on 7 to 10 rafts anchored between the beach and the nettle fence. 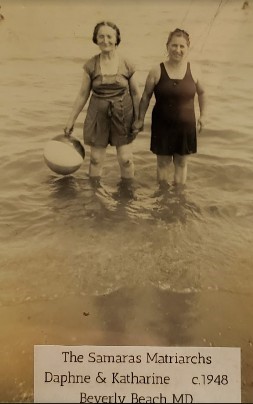 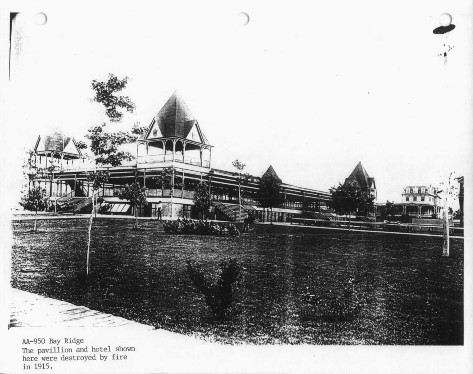 Bay Ridge, known as the ‘Queen Resort of the Chesapeake’ was developed as as a grand Victorian summer resort in the 1880s. One of the largest Chesapeake Bay resorts, Bay Ridge had been easily accessible from downtown Annapolis and Baltimore via steamships, and ferries, and from both cities plus Washington, DC via the now-defunct the Bay Ridge and Annapolis Railroad. The original resort included a huge hotel, and large attractions such as concert pavilions, dining and dancing areas, games, roller coasters and various other carnival-like amusements rides, picnic groves, and a trolley ride.

Plagued by financial problems, the resort eventually closed in 1903, and the Bay Ridge Hotel and derelict resort facilities were destroyed by a fire in 1915. In the same year, just a few blocks away, the new Bay Ridge Beach and Inn opened. Initially it was only a small, beachfront hotel, then expanded in the 1930s to add bathhouses and other facilities and giving it a distinctive “Tahiti” look. The Bay

Ridge Inn prospered as a business, serving nearby residents and drawing crowds from Annapolis, Baltimore, and DC to its public pool & beaches. Often the facilities were reserved for private parties or events – attracting major company outings. The pool was L-shaped, drawing large crowds with its springy high diving board. Adjacent to the pool was a massive, aqua-blue-and-white pool-house that housed concessions, food, arcade games and slot machines. The Inn also offered everything from pony rides and volleyball to elegant banquets and dancing. Vast acres of picnic tables would seat happy groups, BBQ-ing, eating and drinking in the shade until the pool closed in the evup to as 3,000 guests.

In addition to the family-oriented activities, the Bay Ridge Inn’s banquet hall served as a major social facility, year-round, for Annapolis area Greek-American youth. This included rock dances, Annapolis High School class reunions, and other social activities. Wedding receptions were held there for George and Kathy Samaras in 1966, and for Ted and Linda Siomporas in 1968. The Bay Ridge Inn was closed to the public in 1997. 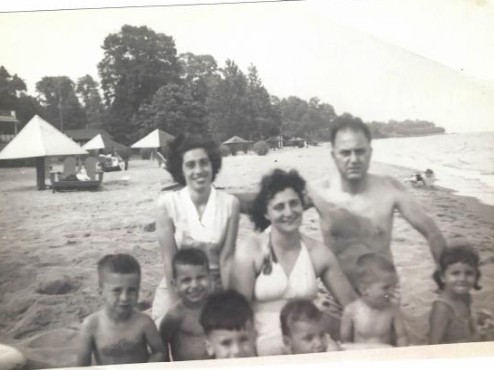 A great day at Bay Ridge Beach in June 1951. The Panos, Petros, and Pantelides families, along with many of the early Greek immigrants, made Bay Ridge Beach one of their favorite gathering places.

Our parents are now in Heaven and the children now in their 70s remember these very special days and growing up together. 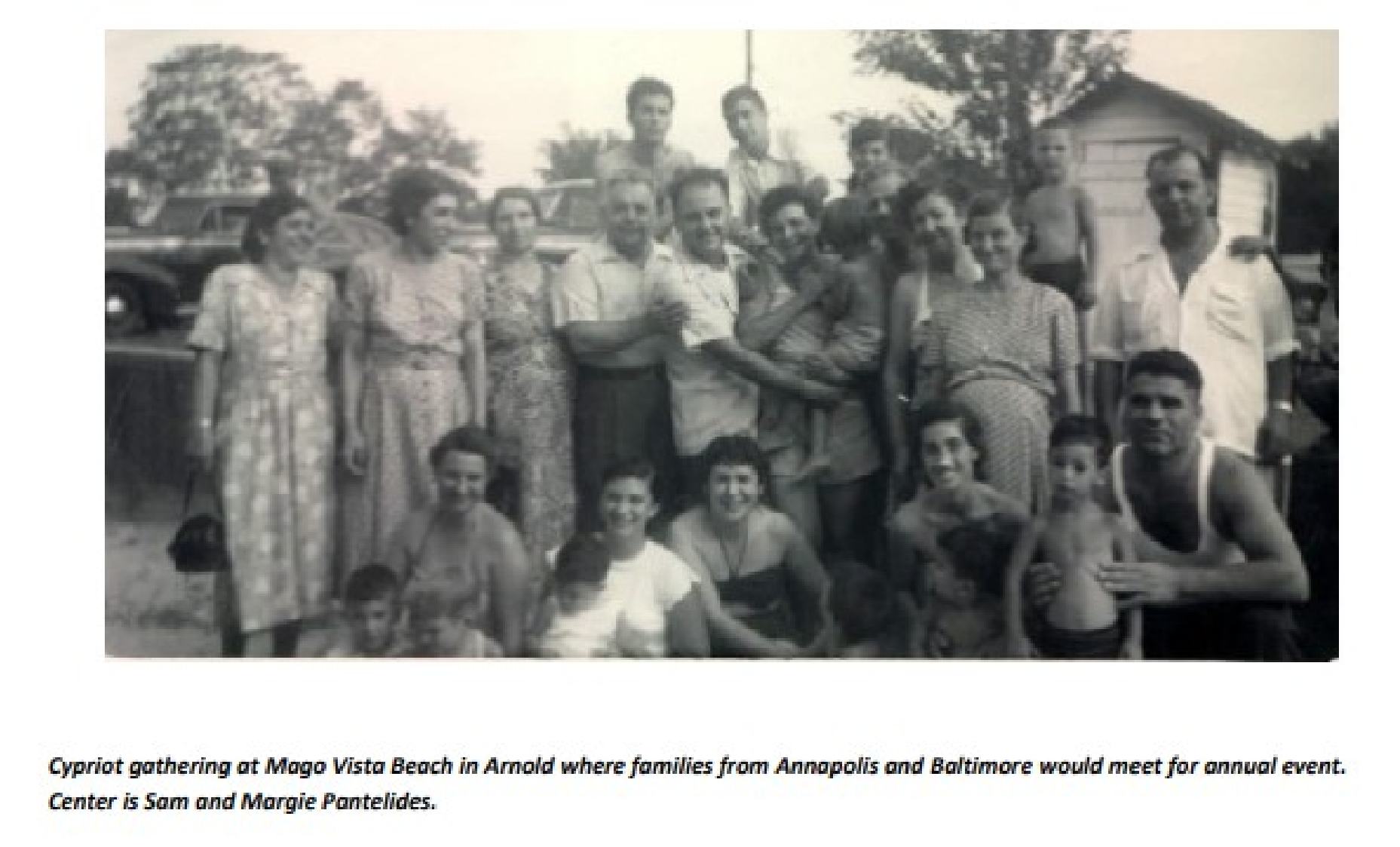 After the closure of the Annapolis Roads and Horn Point Beaches, Oak Grove Beach in the 1950s became both the smallest and the closest public access beach to downtown Annapolis and Homewood, where most Greek-Americans lived (this excluded Carr’s Beach, during the segregation era).

Oak Grove Beach was the only public access beach to be owned by Greek-Americans: John Kallis(?) and Nick Pantelides (?). As such, many Annapolis area Greek-Americans frequented Oak Grove Beach. This included a Church Sunday School end-of-year outing in the mid-1950s. Little Teddy Siomporas had planned to go into the South River water that late morning, but was intercepted by his father Tom with a better offer: father-son tickets to the Washington Senators game that afternoon.

Oak Grove Beach closed many years ago, and has been converted to a marina. 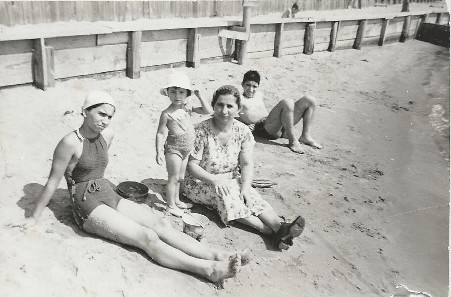 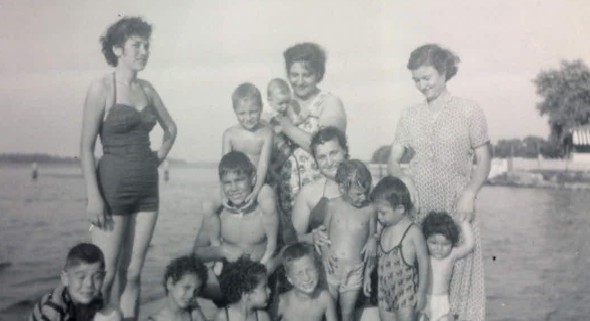 “A day at the Oak Grove Beach 1960’s, Standing are mothers Demetra Keshes, Helen Nicholas, and Maretsu Kyriacou, sitting is Margie Pantelides. Many mothers would take their children to Sandy Point, Mago Vista and Bay Ridge Beach to escape the heat.

Swimming, fishing and boating on the shores of the Chesapeake.

In 1948, the state purchased the site of a ferry landing that had served the Chesapeake Bay Ferry System on its run across the bay to Kent Island at what is now Matapeake State Park. The park opened in 1952 with racially segregated beaches and bathhouses which led to litigation in 1955. The U.S. Supreme Court ordered the park to become integrated, which ultimately extended the Fourteenth Amendment to state beaches and other recreational facilities.

Many of the early Greek immigrants made Sandy Point State Park one of their favorite gathering places.

Horn Point Beach had been a public beach and picnic grove that was in operation from 1919 into the 1930s. This had been the easiest public beach to access, just a short walk from downtown Annapolis over the Eastport Bridge, to Horn Point. Although Horn Point Beach had been at a location with treacherous currents, where the Severn River main shipping channel met the entrance to Annapolis Harbor, and the site of many drownings, many local residents flocked to it during Summer heat waves.

A major tragedy struck the Greek-American community of Annapolis when 24 year-old Peter Convits drowned in the main channel of the Severn River on July 1, 1920, immediately beyond the shallow water along Horn Point Beach.

This tragedy struck the small yet emerging Annapolis Greek-American community hard. Katherine Samaras, who had arrived at Ellis Island on May 29, 1920, and had just come to her Annapolis residence directly from her Atlantic City honeymoon, was shocked by the event, which occurred only a few days after her arrival to Annapolis, as she related the tale of the drowning to her grandson Ted Siomporas in the 1970s.

See the article below from the Evening Capital July 2, 1920 edition: 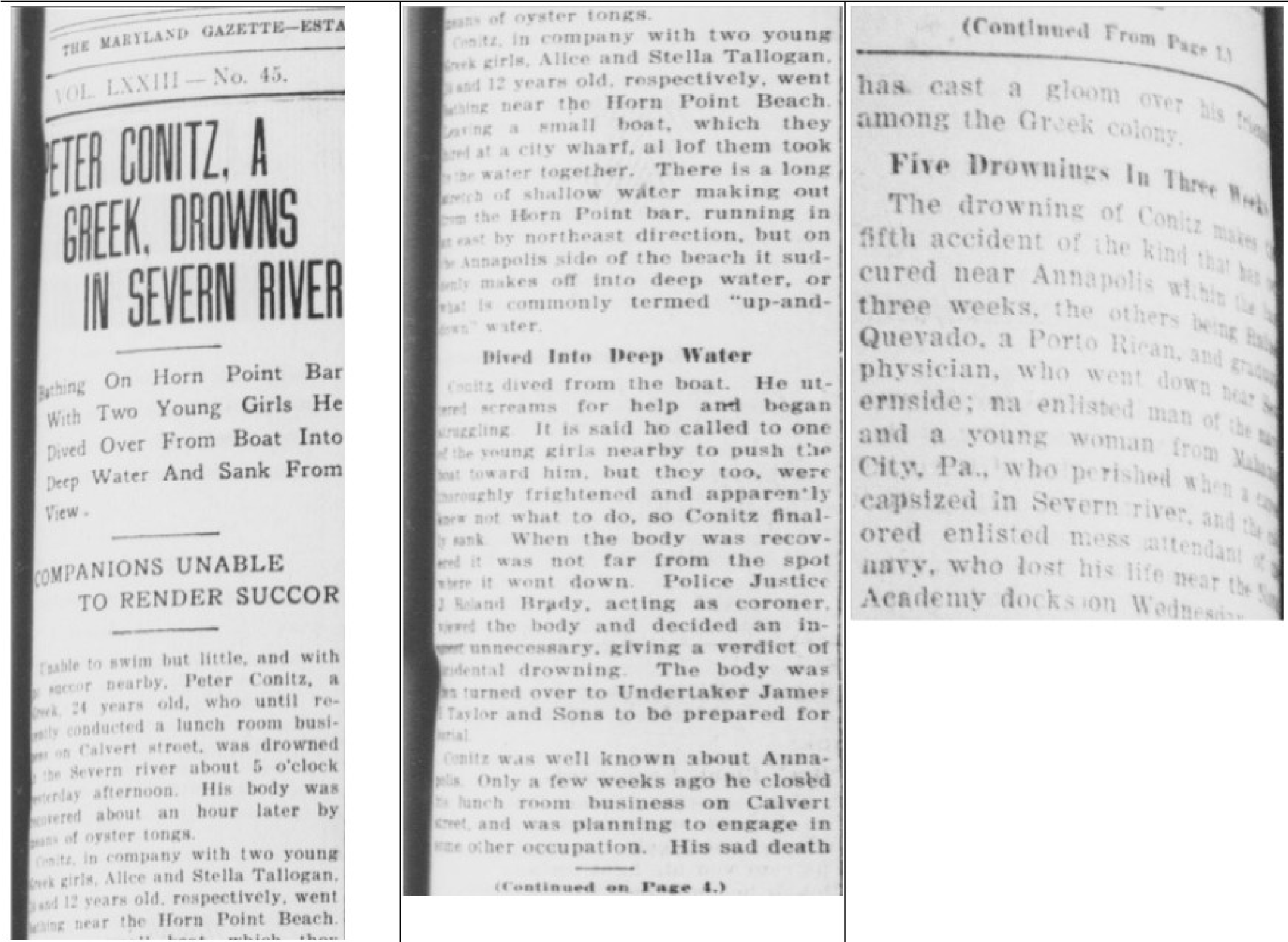