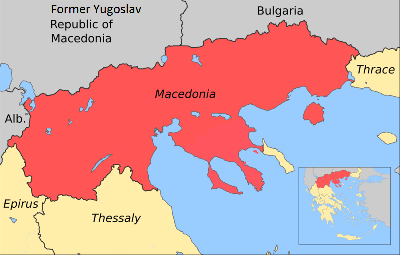 Macedonia (Μακεδονία) was an ancient kingdom on the periphery of Archaic and Classical Greece and later the dominant state of Hellenistic Greece. Before the 4th century BC, Macedonia was a small kingdom outside of the area dominated by the great city-states of Athens, Sparta and Thebes, and briefly subordinate to Persia. The cultured Athenians may have considered the Macedonians to be barbarians (which may still be somewhat true today).

Most of Macedonia suffered under Ottoman rule for over four centuries. Despite unsuccessful uprisings in 1689, 1767, 1876-79, 1881, and 1903, and the pogroms, destruction of hundreds Macedonian villages Macedonian women sold into slavery, mass executions of Macedonian men, and other atrocities during and after the Greek War of Independence of 1821-1830, Macedonia was unable to join fellow Greeks from southern portions of Greece, whose independence was declared in 1830. While continuing under Turkish rule over the remainder of the 19th Century, ethnic Greeks competed with ethnic Serbians and Bulgarians for control of Macedonia, obstructing Macedonian independence.

From 1904, there was low intensity warfare in Macedonia between the Greek and Bulgarian bands and the Ottoman army. The 1908 Young Turk Revolution saw the reinstatement of constitutional monarchy in the Ottoman Empire with a domino effect on geo-politics of all the Balkan states, including Macedonia, which was sought to be annexed by its Balkan neighbors as well as poised for reunification with Greece. In 1909, the Military League, a group of Greek officers created Eleutherios Venizelos to persuade King George I to revise the Greek constitution and asked the League to disband in favor of a National Assembly. Bulgaria, which had secured independence in April 1909, sought to annex districts of Ottoman Thrace and Macedonia in August 1910.

Following the Italian victory in the Italo-Turkish War of 1911–1912, the Christian Balkan countries took the opportunity to promote their national agenda by expanding in the territories of the falling Ottoman empire to liberate their enslaved co-patriots. In order to achieve that, a wide net of treaties were constructed and an alliances was formed in 1909-12 between Greece, Bulgaria, Montenegro, and Serbia, creating the Balkan League. However, the “Macedonian Question” remained, with the Slavic nations seeking an autonomous Macedonia while Greece sought annexation.

War was declared against Turkey in 1912 by the Balkan League states, including Greece. The First Balkan War of 1912-13 had Greece, Serbia, and Bulgaria joining forces to defeat the Turkish army in Macedonia. In the Second Balkan War of 1913, Bulgaria, dissatisfied with its loss of Macedonia, attacked Greece and its former Balkan League allies. The peace treaties of the two wars partitioned Macedonia between Greece, Serbia, and Bulgaria, with Turkey reclaiming Eastern Thrace.

After losing the Balkan Wars, millions of Turks departed Macedonia and other Balkan areas in favor of Turkey, and the Young Turks retaliated against Macedonians and other Greeks within its border with embargoes, exiles, persecutions and, finally, genocide.

During World War 1, Macedonian turmoil continued. In 1915, a large Allied expeditionary force occupied Thessaloniki, stimulating the political conflict between the pro-Allied Prime Minister, Eleftherios Venizelos and the pro-neutral King Constantine, who was subsequently was assassinated in Thessaloniki. In 1916, pro-Venizelist army officers, with the support of the Allies, launched an uprising, which resulted in the National Schism, separating pro-Allied Macedonia from neutral to pro-German Greece. Venizelist army officers, with Allied assistance, launched a coup which secured Thessaloniki and most of Greek Macedonia for Venizelos. From that point Greece had two governments: the “official” royal government at Athens, which maintained Greek neutrality, and the “revolutionary” Venizelist “Provisional Government of National Defence” at Thessaloniki.

The Great Thessaloniki Fire of 1917, accidentally sparked by French soldiers in encampments in the city, was destroying most of Thessaloniki, causing nearly half of the city’s Jewish homes and livelihoods to be destroyed, leading to massive Jewish emigration.

Following World War 1, turmoil continued in Macedonia during and after the Greco-Turkish War of 1919–1922, which resulted in permanent separation of Eastern Thrace from Macedonia, genocide of Greeks in Turkey, and substantial ethnic cleansing: more than 1,250,000 refugees left Turkey for Greece after the war in 1922; in the years up to 1928 the Greek government settled over one-half million of these refugees and over 50,000 colonists from other parts of Greece into Macedonia, many to the squalor of the shantytowns assembled on the outskirts of Thessaloniki, in order to subject them to police control. The refugee communities were centers of poverty, crime, and social unrest. Most refugees arrived in Greece impoverished and often sickly. Over 70,000 farming families moved from Turkish territory to Macedonia, into the houses abandoned by the exchanged Moslems. By 1930, 45% of the Macedonian population were refugees.

Compounding the Macedonian refugee problem, the Immigration Act of 1924 passed by the U.S. Congress, sharply limited the number of immigrants the United States was willing to take annually, thereby removing one of the traditional “safety valves” that Greece had in periods of high unemployment.

Also in 1924, the May Manifesto resolution of the Communist Party of Yugoslavia declared the right of the Macedonian people to self-determination, leading to the eventual failed attempt by the Communists to conquer Macedonia. In the 1920s and 1930 many Macedonians flirted with Communism. The Great Depression of the 1930s impacted already poor Macedonia, and the threat of fascist invasion loomed.

Macedonia was at the crossroads of Fascist invasions of Greece during the 1940s. First, the Italian army invaded Greece on 28 October 1940. The invasion was a disaster, the 140,000 troops of the Italian Army in Albania were defeated by in the mountainous terrain on the Albanian–Greek border and the tenacious resistance by the Greek Army. By mid-November, the Greeks had stopped the Italian invasion just inside Greek territory. The Greeks counter-attacked with the bulk of their army and pushed the Italians back into Albania – an advance which culminated in the Capture of Klisura Pass in January 1941, a few dozen kilometers inside the Albanian border.

The defeat of the Italian invasion and the Greek counter-offensive of 1940 was the first Axis setback of World War 2. The Italians subsequently conducted the unsuccessful Spring Offensive. The Greeks had became dangerously low on ammunition and other supplies, and British material aid was insufficient.

Adolf Hitler decided that that potential British intervention in the conflict represented a threat to Germany’s rear, as British ground forces entered Greece the next day. On April 6, 1940, the Germans invaded northern Greece. During the Battle of Greece, Greek and British forces in northern Greece were overwhelmed and the Germans advanced rapidly west and south. Greece surrendered to German troops on 20 April 1941; 14,000 Greeks were killed and 5,000 were missing.

During World War 2, Macedonia was occupied between Germany (later replaced by Bulgaria) and Albania (controlled by Italy).

The Germans and its Bulgarian Axis allies systematically persecuted the Jews as they had in other parts of Europe. Thessaloniki, which once held the largest majority population of Jews in Europe, was most impacted. In 1943 the occupiers forced the Jews in Thessaloniki into a ghetto near the rail lines, and started deporting them to concentration camps and labor camps, where most of the 60,000 deported died. This resulted in the near-extermination of the community: Thessaloniki, which had once held the largest Jewish population (by percentage) in Europe, had its post-war Jewish population reduced to only 1200.

In 1943, the Communist Party of Macedonia was established. The National Liberation Front (Εθνικό Απελευθερωτικό Μέτωπο – EAM)) was the main movement of the Greek Resistance during the Axis occupation of Greece. EAM became controlled Communist Party of Greece (KKE). Some Macedonian citizens joined the KKE Communist-led resistance movement.

After the German withdrawal from war-torn Greece in 1944, Communists attempted to take over Macedonia and the entire nation. KKE, backed by the other Balkan states communists, began political agitation, including riots. Despite various agreements for peaceful settlements, KKE turned to violence. In the Greek Civil War of 1946-1949, some Macedonians fought on the side of the KKE. The neighboring communist states of Albania, Yugoslavia and Bulgaria also supported the KKE communists. Thousands of Macedonians lost their lives and great numbers of the Macedonian villages were burned to the ground. , due substantially to US foreign aid under the Truman Doctrine.

But after few years of KKE’s success, the Communists lost the war. Serious differences had developed between the leadership of the resistance and many Macedonians within the movement. Meanwhile, beginning with the Battle of Athens in December 1944, the British-supported royalist reaction against the left was also directed against the Macedonians. The Truman Doctrine, the American intervention, and the final defeat of the Communists in 1949, also crushed blow for the national aspirations of those slavic Macedonians who had sought separation of Macedonia from Greece.

While Macedonian demand for immigration opportunities accelerated based on the Balkan Wars and successive tragedies, the supply of such opportunities was substantially reduced by the Emergency Quota Act of 1921, which established numerical limits on the number of immigrants who could enter the United States, made stricter and permanent by the National Origins Act of 1924. Country-by-country limits suppressed “undesirable” ethnic groups and continued the dominance of immigration from Western Europe; Quota figures were based on the ratio of different ethnic groups existing in America in 1890, before the second big wave of immigration by southern and eastern Europeans, including Macedonia.

To implement the quotas, the whole immigration process was changed in 1924 to the visa system we still use today. Ellis Island was reduced to being a detention center for a trickle of immigrants with problems upon arrival and for persons being deported. Parts of the island fell into disuse after 1924 or were used by other government agencies for other purposes. Eventually, the government decided it wasn’t worth keeping up the huge Ellis Island complex for that trickle of detainees, and the facility was abandoned in 1954.

The Macedonian Immigrants to Annapolis

The first known Macedonian to settle in Annapolis was Tom Siomporas, from the village of Serini, outside of the town of Grevena. Although Tom entered the US as 19-year old who had been brought up in the Macedonian mountainside as a goat-herder and not knowing a single word of English, he was not an immigrant. Tom was the son of US citizens, sent back with his pregnant Romanian-born mother to Macedonia in 1911, before the outbreak of the Balkan Wars. After the tragic death of Tom’s mother during child birth in 1912, Tom was raised by his grandparents, uncles, and aunts, unable to leave Greece due to multiple wars and other factors including fear of his unseen stepmother. Tom came to Annapolis in 1942, when based at nearby Fort Meade, met his future wife via a fixed-up date, then married in 1943 and subsequently opened the S&S Restaurant on West Street in 1944.

The Annapolis’ second Macedonian was Magdeline (Marge) Pantelides, grandmother of Mike Pantelides, future Mayor of Annapolis. Marge, who was American-born with roots back to the Macedonian town of Shatista, came to Annapolis in 1945 with husband Savvas, to run the Royal Restaurant on West Street. (Savvas Pantelides and Tom Siomporas had worked together to run Fort Meade’s massive mess Hall during World War 2, feeding several million meals to US Army soldiers).

After Tom Siomporas had planted the Macedonian anchor in Annapolis and was on his way into the American Dream, he began a lifetime of sponsoring, or otherwise facilitating, the immigration a fellow Macedonians. Starting in 1952, Tom sponsored his teen cousin Mike (Telemachos) Kokkinos, for an immigration visa leading to citizenship, and facilitated the sponsoring of nephew Billy (Vasili) Siomporas, initially via Astoria, Long Island, but ultimately into Annapolis by the late 1950s. 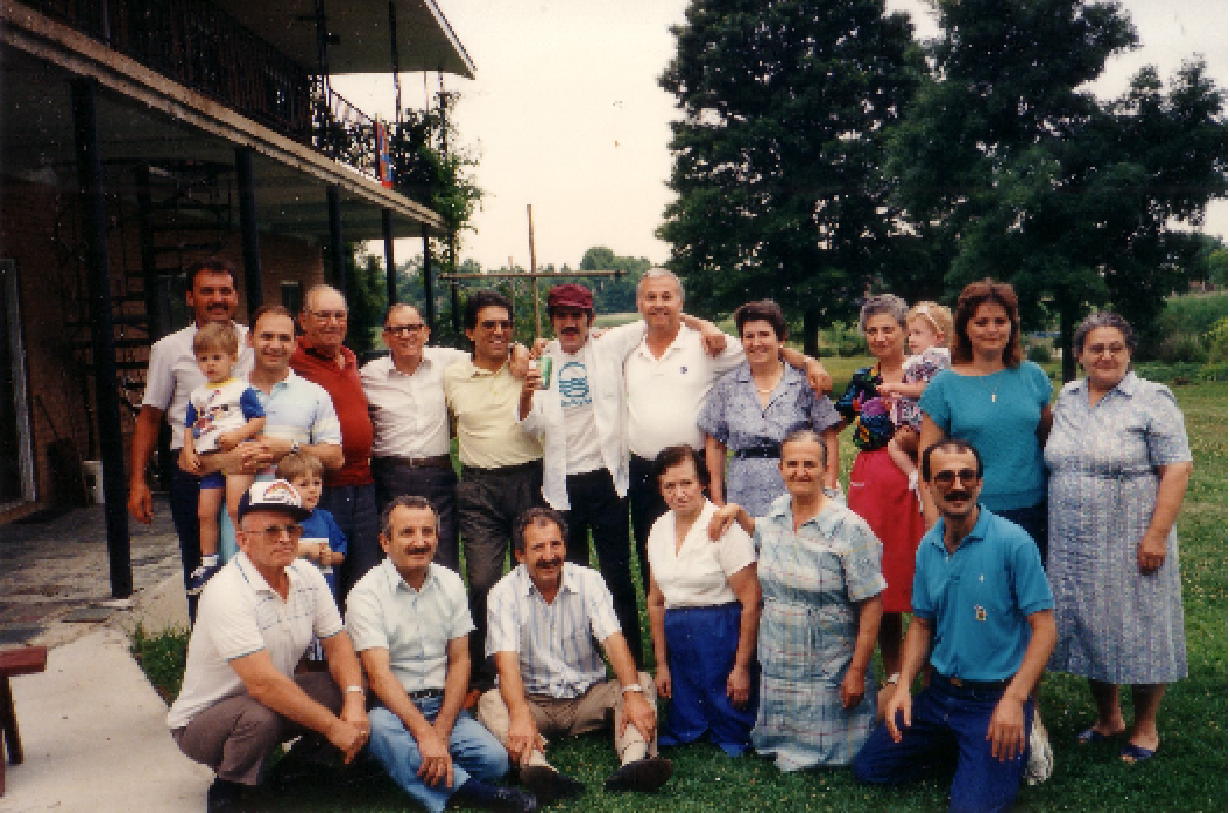 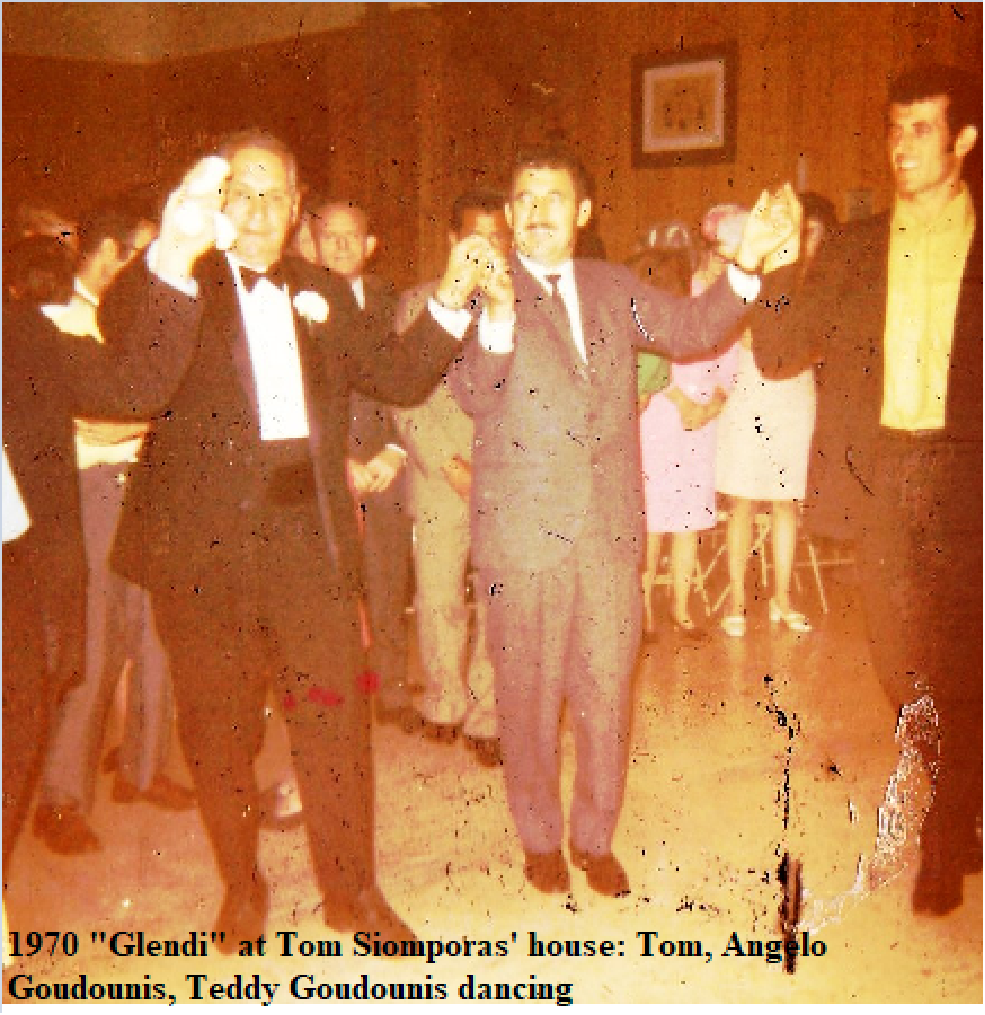