Discovering the Power of Greekness 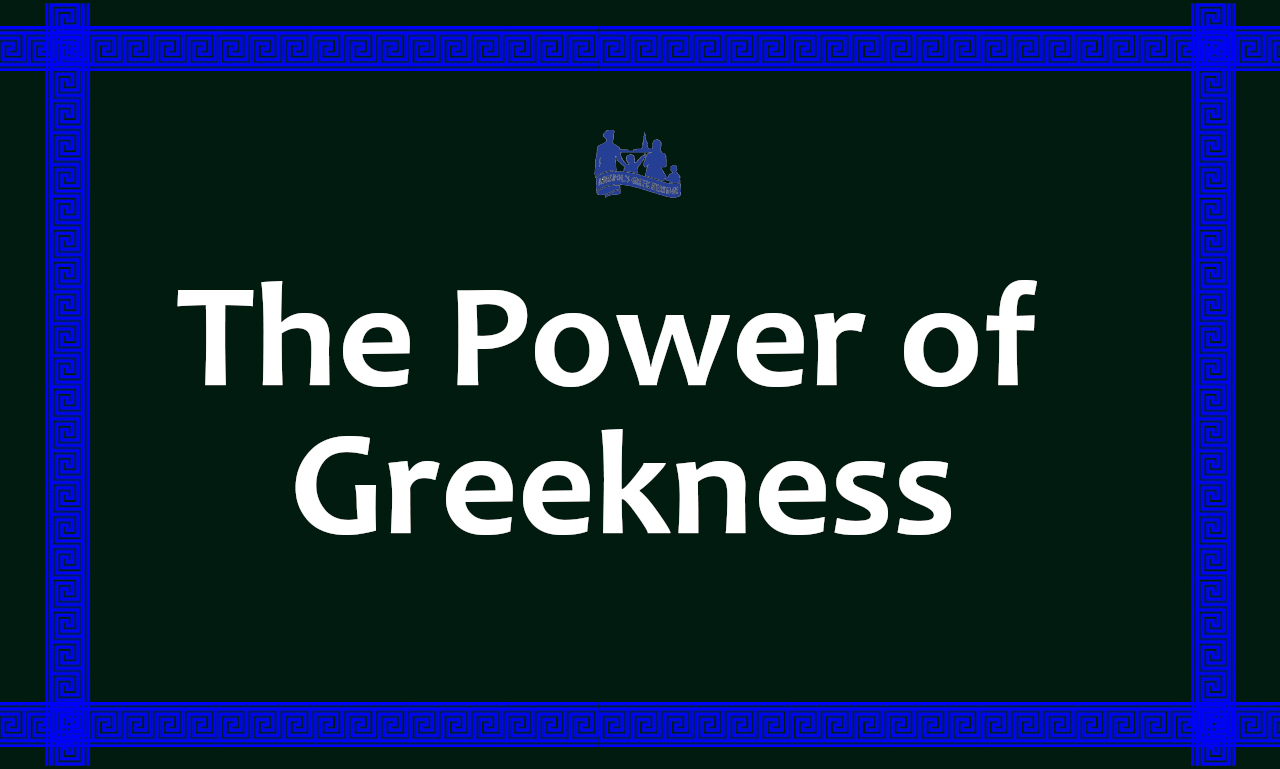 The Greek Culture was central to my family’s way of life. All the kids in the Annapolis Greek community were required to go Greek School which was held three days a week after “American School,” the name we gave to our regular public school classes. Each week during these three hour sessions we were taught how to speak Greek as well as to read and write the language. We learned about the Greek culture that primarily were the values from the villages that we brought to America by my parents and all the families who immigrated from Greece and landed in Annapolis – a city with a Greek name – Anna  = Princess Anne – the future Queen of England. And Polis- the Greek word for City – Thus Annapolis – the City of Anna.

My entire life, my father reinforced that we Greeks have ingrained in our DNA the concept of Philotimo – the most important word and concept for a Greek. It is a word that cannot be translated. Love of Honor is the official translation, it is a word almost impossible to translate sufficiently, as it describes a complex array of virtues that encompasses honor, dignity and pride, the ideal actions and behaviors, hospitality, bonds, and responsibilities between each other, as said by Theodora Maios in her article “Philotimo to Greeks is like breathing. A Greek is not a Greek without it”

My Dad told me on many occasions that I will know it when I see it, if will come naturally, and you will know when to do the right thing. I had wonderful deep discussions about the concept of Philotimo that he had received from numerous Greeks and how he felt he has contributed to the concept.

It was an incident that occurred in the summer of 1963 that really solidified my understanding after the many years of hearing about this elusive concept. On hot humid day in July, the kind of day that is so hot that your clothes stick to your body, a new soon to be inducted Plebe into the Naval Academy arrived in Annapolis with this family from Bluefield West Virginia. His name, Telemac Christ, a first generation Greek American. After a day at the Naval Academy of introductory festivities for the new Plebes and their families, Telemac’s family departed for the long ride home to West Virginia. On the first day of induction, each Plebe is required to make a onetime payment, in 1963 the amount was $400.  Well, as you can probably guess, Mr. Christ forgot to give his son the required money. Facing a three hour deadline to pay or not to be admitted into this prestigious institution. What happened next is truly amazing.

The young man Telemac remembered his mother saying that she a childhood Greek friend who married and moved to Annapolis. Panicking to beat the time deadline, Telemac goes to a phone booth just outside the gate of the Academy. He did not know his mom’s friend name. So he looked up in the phone book (remember those) one of the most common Greek names, Pappas. He found and called Mrs.  Pappas desperately trying to find the family friend. Mrs. Pappas could not help to find the woman, instead she tells Telemac to go the Little Campus Restaurant on Maryland Ave just two blocks from the Naval Academy.  When Telemac gets to the restaurant he finds the brothers who own the restaurant, George and Angie Nichols, as well as a couple other Greeks including my Uncle Big Nick Samaras. When the young man explained his dilemma, these Greeks reach into their pockets and cash register and gave Telemac the $400 he needed to enroll. On today’s value it is $3700, incredible.

Happy ending, Telemac enrolls and graduates then goes to Law School. He became Chief Counsel for one of the largest power companies in the nation. His father realized after a couple hours on the road that he failed to give his son the money and promptly returns to Annapolis just after the deadline. He finds out how Greeks lent money to a young Greek boy, he goes to the Little Campus to return the money and thank all involved. At the restaurant the West Virginia Couple finds out the name of the childhood friend, Bessie Samaras – my MOM! They follow my uncle to our house where there was long awaited reunion. They had dinner with us and my folks insisted that spend the night. It was then that my father’s words came true, “you will know Philotimo when you see it.” At the end of that day, I understood The Power of Greekness.